The Chinese University of Hong Kong

Ruins, abandoned buildings, decaying places, derelict architecture, produce a diversity of forms, meanings and practices, as well as very specific configurations of Chinese urbanities. While Chinese ruins and decaying processes have been greatly studied in urban studies, this workshop aim at discussing ruinscapes in China from ethnographic perspectives, crisscrossing anthropology, sociology, and visual studies. Residual parts of natural disasters, their preserved or left abandoned ruins, will be the entry point of this reflection, as we commemorate this year the ten-year anniversary of the Wenchuan earthquake (12 May 2008, Sichuan). Papers will show how they easily enter into enriching dialogue with other Chinese ruinscapes outcome of various events and crises such as housing demolition, economic shrinkage, and failed architecture. The workshop will question categories of ruins and raise the complexity of their underlying representations and uses in China. The workshop is conceived in three parts: “traumatic” ruinscape, “ordinary” ruinscape, and visual representations of urban ruins. By discussing from contrasting angles and different academic disciplines, this workshop introduces new insights on the texture, the spatiality, as well as the discourses and social practices of ruinscapes in urban China. 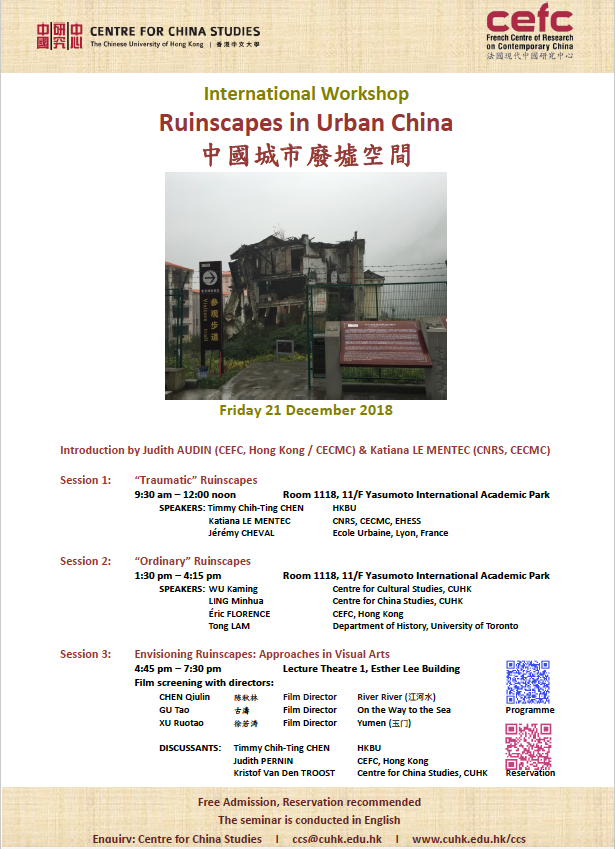 The first part of the workshop reflects upon the social impacts of three kinds of ruins, remaining destroyed urban landscape after the Wenchuan earthquake, temporary demolition spaces on the Yangze banks before their submersion by the Three Gorges Dam Reservoir, and the ruins of urban demolition in Shanghai’s lilong.

The second part of the workshop explores the “ordinary” dimensions of urban ruins in China and the theme of marginality through the case study of how marginal groups (migrant workers) appropriate theses liminal spaces, between wastescapes, and demolished spaces. The strangeness of abandoned buildings will also be examined through the practice of urban exploration. The liminality of ruins and of the way they are “lived in” is a way to rethink the dynamics of economic, social, and ecological crises and to provide another understanding on Chinese urbanities.

15.15 Tong LAM (Associate Professor, Department of History, University of Toronto): Because There is No Room for Fiction in China’s (Extra)ordinary Ruins

The last part of the workshop is dedicated to film screenings on the topic of disaster and destruction work ruins. Screenings will be followed by a collective discussion on the way Chinese ruinscapes are envisioned. How visual arts seize such spaces and landscapes? What kind of messages can they convey that other forms of communication can’t? How visual arts and social sciences can collaborate to better understand issues related to urban ruins in contemporary China?

Filmmaker returns to Wenchuan where he was born and which was hit by the most devastating earthquake in Chinese history with 70,000 deaths, 375,000 seriously injured and over 17,000 people missing. His parents survived, but lost everything. How does an artist deal with this much suffering?

Filmmaker returns home, to the Three Gorges Area, at the time the Yangtze river bank cities are on the process to be deconstructed to make place for the Three Gorges Dam Reservoir. Farewell Poem is the first work of a long series of visual art works Chen Qiulin dedicated to the changes of urban landscape, of time and of people.

« Reality is that which, when you stop believing in it, doesn’t go away »

Have you ever wanted to travel without going too far? Looking for and finding lost places in a city is a challenge but usually worth the efforts. Entering abandoned places feels like stepping in another dimension of space and time: the urban picture one saw before is now distorted, and one accesses an alternate reality, standing there just as “true” as the “normal” one, but less visible, less accessible, less well-known... And that is the beauty of it, when the materiality of the place, its ecosystem, tells us its story without any intermediary. Some fear the danger or the dirtiness, but others can appreciate a true magic in the forbidden, forgotten, urban space.
In China, this is not a massive hobby. And yet, exploring abandoned or hidden places in Chinese cities is really stimulating: Western/Chinese style buildings from the beginning of the 20th century, socialist architecture of the 1950s, fast urbanization and gigantic ambitious planning projects turning out to be failures... I want to share some discoveries without putting the places at risk: please don't ask me for precise locations, the search is part of the fun anyway!

Websites about abandoned places in China and East Asia